“Northern Girls is less The Great Gatsby than Fifty Shades of Grey.  It as a whole comes across as a primal scream, a demand that readers acknowledge the financial, emotional, legal, and sexual exploitation suffered by millions of Northern Girls who have migrated to China’s cities in search of work.” 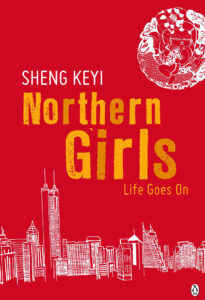 In the early 1990s, people all over China are scrambling to make their fortune. Qian Xiaohong is one of them. With no diploma, no skills, and no residence permit, she is one of the class known to residents of Guangdong as ‘northern girls’ – young women who come from outside the province to work, and a class who is to be completely ignored. She does a variety of blue collar work, including shampoo girl, hotel receptionist, and shop keeper, going through jobs almost as quickly as she goes through men.

Qian Xiaohong is naturally endowed with large breasts, which become her symbol of womanhood, making her endure humiliation and harsh labels, but also reflecting her vigor and vitality. Like Jack Kerouac’s On the Road, Qian Xiaohong represents true life on the road, where real life goes on.